Thinking about Gu Yu’s story, Zhang Siyi took a moment to ponder yesterday’s events. When talking to the tree, Lu Qiao directed his hostility towards Zhang Siyi. Even though Lu Qiao clearly was against homosexuality, he didn’t seem to hate Gu Yu, only Zhang Siyi. In the final analysis, it was because Gu Yu’s skills were vastly superior to Lu Qiao’s.

Zhang Siyi: “I thought he was a friend of mine.”

Gu Yu: “Perhaps before, when you were just starting at the company, you didn’t pose any threat to him, but now is not the same. He felt threatened by the rate at which you progressed because it was much greater than his own.”

Gu Yu’s words reminded Zhang Siyi of the mentality he had when Tai Fei first joined. It was quite similar. Having his position threatened by a new person, Zhang Siyi felt an inexplicable hostility towards Tao Fei. Once Zhang Siyi saw his skill and realized Tao Fei wasn’t recruited for the same level of work that Zhang Siyi was assigned to, his competitiveness disappeared.

Now that Zhang Siyi could related to Lu Qiao feelings, he didn’t feel as bothered by yesterday’s matter.

Gu Yu: “Mood swings vary from person to person. Some people are even keel, while others get upset over the tiniest infringement. When feelings become even more exaggerated, the person might act paranoid and think that others are looking down on them.

Zhang Siyi wanted to defend himself and eagerly exclaimed: “I never looked down on Lu Qiao!”

Gu Yu laughed: “I was just giving an example. You didn’t look down on Lu Qiao, but he came from a poor family with low self-esteem. Inevitably, his sensitivity towards other people’s comments is high and likely would blow them out of proportion. Do you remember the conversation you had with Tao Fei on the subway when we first arrived in Osaka?”

Zhang Siyi remembered. Tao Fei mentioned the fact that it was the first time Lu Qiao traveled by plane. “But it was Tao Fei fault for making him upset, not me. I tried to help!”

Gu Yu: “But Lu Qiao didn’t know this. What he saw was your close relationship with him. As a result, he placed you and Tao Fei into the same class of people.”

Zhang Siyi: “…” The source of the problem was in fact, the outspoken mouth of that Dead Fat Peach!

“It’s just that Lu Qiao found out we are together. Since he doesn’t agree with homosexuality, it gave him a reason to hate and discredit you.” Gu Yu turned his head to look at Zhang Siyi: “Luckily, he didn’t do anything about it, so no harm was done, right?”

Zhang Siyi is still fearful. If Lu Qiao spread the news around, he and Gu Yu would definitely have to leave the company.”

Gu Yu softly said: “Getting back to BB…… He hated me for the first year at university which I didn’t understand at the time. Later, I heard he fell ill and took a leave of absence from school.”

There was no use gloating over it. Gu Yu sighed and said: “Two years ago, I went back to see a history of architecture professor whose class I was in. The professor was very kind. It was said that when BB was feeling depressed, he often visited the professor to chat. When I went back to visit, the professor had showed me a letter written by BB and in the body of the letter, BB had explained why he hated me.”

Zhang Siyi: “What was the reason?”

Gu Yu: “It was because of one day in art class, I had mocked him for his bad drawing.”

Zhang Siyi: “…” Shit! For that reason? What kind of grudge did he have!

Gu Yu shrugged: “I have forgotten what I said exactly. Maybe a little joke, but I don’t think I would have ridiculed him.”

Knowing Gu Yu, Zhang Siyi also thought he probably said something very sarcastic, but Gu Yu isn’t the type of person to act out of spite. Besides, what is the matter with a little sarcasm? If you can’t handle the stress from a little criticism, you will have bigger worries in life!

“After the incident, he treated me as his imaginary enemy and targeted me at every opportunity. Since he couldn’t beat me, he slowly pushed himself over the edge. When he dropped out of school, he returned home for treatment. As part of his recovery, he wrote a letter to the professor and even though it wasn’t directly to my face, he apologized to me in it. The professor thought I might have held a grudge for BB so the professor quietly showed me the letter in hopes I could let go.” Gu Yu paused. “In fact, I never let the things he did bother me……”

Zhang Siyi choked back a laugh. His admiration for Gu Yu was ever increasing. Making a vow in his heart, Zhang Siyi decided he must be like Gu Yu and let his inner strength prevail. Never let the demons in.

Drinking his milk, Gu Yu swallowed then continued: “Regardless, I was very grateful the professor showed me the letter. After reading it, I felt like I understood human nature better. Do you think BB was hateful? In actuality, he was rather pathetic.”

Zhang Siyi nodded. He knew that Gu Yu didn’t purposefully scorn BB, rather it was BB own phycological issues that caused his own despair.

Gu Yu: “Last night, when we heard Lu Qiao crying woefully at the tree, BB immediately came to mind. Perhaps in the same way, he felt desperate and his mental plight was at a precipice. A more effective way to help, was to approach him instead of letting him solve the problem by themselves.”

Now schooled, Zhang Siyi sighed with relief: “I’m not angry at Lu Qiao.” Once the anxiety in his heart was laid to rest, Zhang Siyi suddenly felt cheerful. The mood was instantly revived.

He looked up and chugged the remaining milk. Since there was no one around in the morning, Zhang Siyi mustered up his courage and quickly leaned over to kiss Gu Yu.

Zhang Siyi giggled at the imprint of milk of his lips on Gu Yu’s face.

Gu Yu turned to gaze directly at Zhang Siyi eyes and used his finger to suggestively wipe the milk towards his mouth slowly. As his finger was close, he stretched out his tongue erotically and enveloped his finger by his mouth, thereby removing the milk.

Red-faced, in order to maintain his self-control, he took a few steps back away from Gu Yu, then turned around and quickened his pace.

Watching Zhang Siyi’s escape, Gu Yu thought to himself: “He dare tease me outside!” At the prospects of retaliation, Gu Yu smirked.

When they returned to the inn, many members of their group were mulling around the lobby, ready to go. In a rush, Zhang Siyi went back to his room to get his belongings for the day’s activities.

As Tao Fei was walking downstairs, he yawned and noticed Zhang Siyi coming upstairs. He reached out to mess with his hair: “Where did you two go last night?”

Tao Fei: “I didn’t see you guys last night. Did you come back to the room at all?”

Zhang Siyi: “When we came back, you were already asleep. This morning I woke up early before you did.” As he was telling Tao Fei, Zhang Siyi anxiety rose as he saw Lu Qiao’s figure behind Tao Fei’s.

Zhang Siyi didn’t hide and tried to look as calm as possible.

Lu Qiao handed Zhang Siyi an orange bottle cap. Zhang Siyi looked down at it and felt moved. He looked up at Lu Qiao and put his hand onto Lu Qiao’s shoulder. Zhang Siyi smiled and said: “What do you think? Don’t give up!”

Lu Qiao grinned. Due to his lack of sleep, his eyes were a little red and swollen. Regardless, his bright attitude was a stark contrast to his earlier behavior. He smiled: “Will do.” 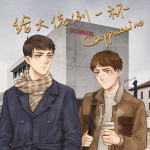